The Tradition of The Takeuchi Ryu

By Muromoto, Wayne
This article first appeared in the Spring 1996 issue of the "SMAA Newsletter." 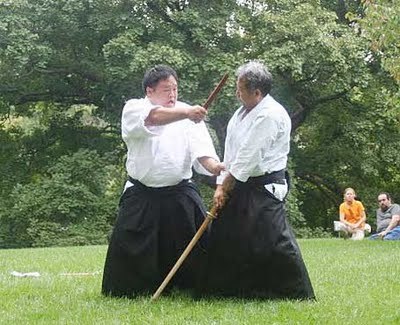 How can you measure the value of tradition? In the case of the Takeuchi (or Takenouchi) Ryu, it is the value of over 450 years of accumulated wisdom and experience, handed down from master to disciple in an unbroken line. Takeuchi Hisamori is considered one of--if not the first--primary martial arts masters who devised and compiled various grappling techniques into what we now generically describe as jujutsu systems.

In the late spring of the first year of the era called Tembun (1532), Takeuchi Hisamori entered a wooded Shinto shrine called Sannomiya, in present-day Okayama prefecture, and spent seven days and six nights preparing himself in ritual austerity for enlightenment. Sannomiya was an important shrine to the Takeuchi family, which traces itself back to the Minamoto (Genji) clan. The Shinto shrine deifies the god Hachiman, the guardian deity of the Genji. On the seventh day, after fasting, praying and pushing himself to exhaustion in martial exercises, he was blessed with a vision.

In recorded family legends, Hisamori encountered a mountain priest (yamabushi) who was an incarnation of the god of Atago Mountain, another patron deity of the Takeuchi clan. (The other clan guardian deities being Marishiten and Miyashi-Takeru Ookami). Hisamori, thinking that the yamabushi was a blind actor sent by his followers to entice him back to the castle, thrust his long bokken (wooden sword) at him. The yamabushi dodged the thrust and flung Hisamori to the ground. Enraged, Hisamori attacked again, and again he was thrown to the ground. This time, however, the mysterious yamabushi applied pressure with his fingers to certain parts of Hisamori's body. Hisamori felt an odd sensation and found that he could not rise up, no matter how hard he tried.

The yamabushi snapped the wooden sword into two equal pieces and taught Hisamori how to use the dagger in conjunction with grappling techniques. He also used a kudzu vine to teach Hisamori how to quickly subdue and capture an opponent. These techniques became the original foundation of the ryu and are called "torite (or toride) koshi no mawari." Subsequently, Hisamori and the following headmasters of the ryu added more methods, resulting in the current list of hundreds of kata (forms), using nearly every unarmed and weapons system in use at that time save for archery, horsemanship and gunnery. (Chefs take note, there are even kata that use a wooden pot lid, metal chopsticks, and umbrella!)

Whether or not we believe that Hisamori actually encountered a supernatural being, there is ample documentation that the ryu was indeed founded in the 1530s, thanks to family records that date from that era and immediately thereafter. Hisamori was succeeded by one of his sons, Takeuchi Hitachi No Suke Hisakatsu, another masterful bugeisha (martial artist) who wandered across Japan testing his skills in various duels. The third master was Takeuchi Kaga No Suke Hisayoshi.

Hisakatsu received permission to use the name Hinoshita (read also Kusaka) Torite Kaizan ("Best Enlightened Master of Torite Under the Sun") from Emperor Gomizuno-o. The honorific title is significant. Kaizan comes from a Buddhist name and associated with torite, signifies that by imperial decree, Hisakatsu and the Takeuchi Ryu was considered the seminal grappling system recognized by the court at that time.

That honor did not come by the family lightly. Hisamori used his methods in battles during the Sengoku Period, which preceded the peaceful Edo Period (1600-1868). Hisakatsu and Hisayoshi tested their skills in countless shinken shobu (open-ended duels), never losing to any other bugeisha. Then, in his old age, Hisamori admonished Hisakatsu and Hisayoshi to change the purpose of martial arts. "The age of great samurai armies meeting each other in bloody strife are over. The age of martial arts used in seeking out opponents and felling them in duels is over. . . . This is an age for bujutsu to give life to people," he concluded.

It has been the mistaken assumption of some Western martial artists to fancy that the ancient ryu, or koryu, martial arts are more "realistic" in their applications. This may be a simple historical fact, but then some of the adherents, who have too little real training in koryu, all too often believe that it also implies that the koryu are "better" than modern budo systems because it's more "blood and guts, " i.e., more vicious. At least in the case of my own ryu, this is patently false. While proven effective in the turbulent era of the Sengoku Period, the Takeuchi Ryu, from its mystical origins down to the current headmasters of the different branches, balances masterful techniques with deeply philosophical and spiritual lessons.

The Santoku-sho, based on the teachings of the first four masters of the style, makes a point that "strength" is not merely physical power. True strength is "to first conquer ego, then to conquer one's own self, and to conquer one's greed." Furthermore, the book states that the Takeuchi Ryu is not simply a bujutsu (martial art) used to defeat others. It is an art "to awaken the goodness in human beings." "Show your adversary the way to return to goodness," the Santoku-sho admonishes. "Being patient, explain the Way of Humanity." The path to enlightenment in the Takeuchi Ryu is through persevering in training. As the body, mind, and spirit develops, five virtues (gojo no toku) are nurtured: jin, gi, rei, chi, shin (benevolence, honor, respect, wisdom and faith). Those teachings, first devised over 400 years ago, are the jewels in the crown of the Takeuchi Ryu tradition.

Note: Portions of this article have been derived from copies of ryu lore given to the author and from the book Shinden No Bujutsu, Takeuchi Ryu by Takeuchi Toichiro.