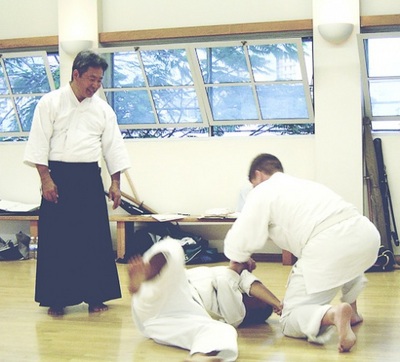 Editor of The Classic Budoka blog, publisher of the late "Furyu" magazine, and expert teacher of Takeuchi Ryu jujutsu

Wayne Muromoto has a lifetime of involvement in the Japanese cultural arts. A resident of Honolulu, Hawaii, he graduated with a BA in Japanese literature and languages from Cornell University. He also received a MFA in Fine Arts, specializing in printmaking and painting, from the University of Hawaii. (Mr. Muromoto has extensively studied traditional Japanese paper making under Fujimori Yoichi Sensei in Tokushima, Shikoku, Japan.)

Beyond his interest in Japanese paper making and painting, Mr. Muromoto has been a practitioner of chado, or the "way of tea," since 1980. He received extensive instruction in the tea ceremony while training at the Urasenke Foundation school of chado in Kyoto.

Mr. Muromoto also has a long history as a student and teacher of budo and koryu bujutsu ("Japanese martial ways and ancient martial arts"). He is a teacher of modern seitei iaido (the "way of sword-drawing") and a student of classical Muso Jikiden Eishin Ryu iaido under Ohmori Masao Sensei of the Rakuto-Kai at Butokuden in Kyoto. He also is an expert in the ancient Bitchu-den Takeuchi Ryu. (Takeuchi Ryu specializes in jujutsu grappling but also includes a vast array of weapons training.) His official permission to receive students and issue rank was granted by the current Headmaster of Bitchu-den Takeuchi Ryu. He is, furthermore, a Senior Advisor for the Shudokan Martial Arts Association and holds the title/rank of Shihan/sixth dan in its Traditional Jujutsu Division.

Currently working as a teacher of digital art and photography at Leeward Community College, Mr. Muromoto was also the publisher of the late, great Furyu the Budo Journal and Furyu Online. Furyu was one of the most highly regarded magazines in the traditional Japanese budo field. He is presently publishing The Classic Budoka blog at  http://classicbudoka.wordpress.com/.