By Davey, H. E.
This article first appeared in the Summer 2004 "SMAA Newsletter" 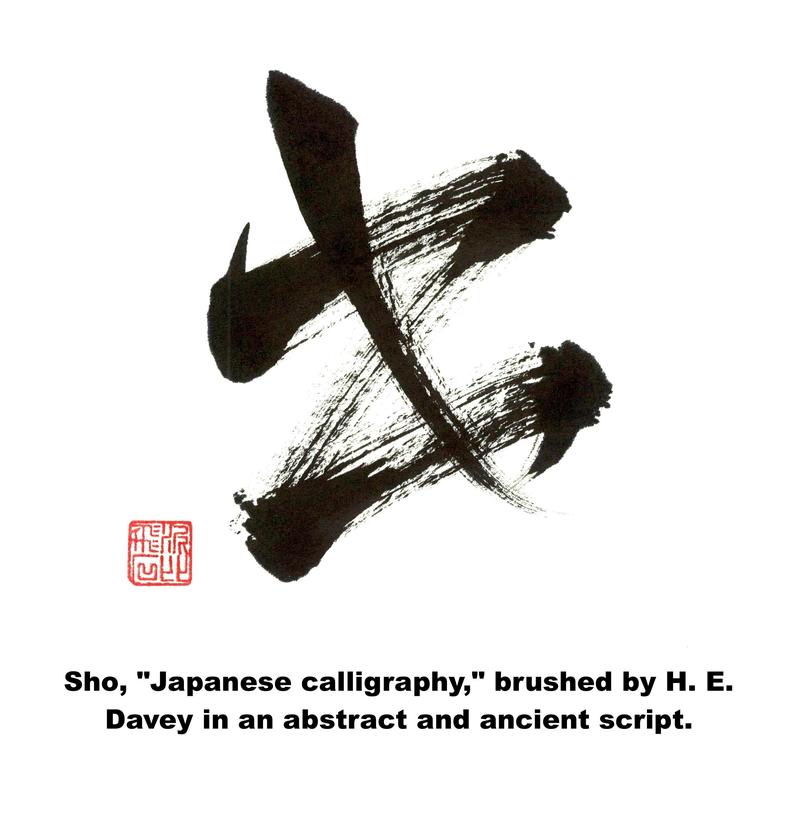 Around 2700 BC, according to age-old Chinese tradition, an enigmatic man with four eyes called Tsangh-hsieh created the first Chinese characters. Captivated by the footprints of beasts and birds, he gave birth to the earliest system of writing in Asia. The God of Heaven was believed to have been so moved by Tsangh-hsieh's ingenious bird-based characters that he made grain drop from the clouds as a symbol of his happiness with humankind.

Jumping forward “a few years,” in 1981, I formed the Sennin Foundation Center for Japanese Cultural Arts in the San Francisco Bay Area. The primary focus of study at the Sennin Foundation Center is Shin-shin-toitsu-do, literally “the Way of Mind and Body Unification.” Shin-shin-toitsu-do is a unique form of Japanese yoga and meditation that was created in the early 1900s by Nakamura Tempu Sensei. In addition to Japanese yoga, the Sennin Foundation Center offers instruction in Japanese healing arts and martial arts (aiki-jujutsu). I teach all three arts, and over the years, I’ve developed a staff of teachers to assist me. However, I also wanted to offer my Japanese yoga and martial arts students optional instruction in brush writing, or shodo. Unfortunately, in 1981, I’d yet to find a shodo teacher that I really wanted to study under.

After looking for a calligraphy teacher for several years, in 1986 I met Kobara Ranseki Sensei, one of the most highly skilled shodo artists living outside of Japan. Deeply impressed, I began practicing with Kobara Sensei, founder of the Ranseki Sho Juku of San Francisco (with branches in Oakland and Palo Alto). Kobara Sensei has evolved a uniquely distinctive style of shodo and an equally creative program of instruction. He has, moreover, received numerous awards for excellence in calligraphy from various shodo associations as well as the Japanese government. With his help, I was eventually able to exhibit my artwork annually at the International Shodo Exhibition in Urayasu, where I’ve also received a number of awards, including Jun Taisho—the “Associate Grand Prize.” In 1993, I received Shihan-dai teaching certification from Kobara Sensei, the highest rank in Ranseki Sho Juku calligraphy.

Upon receiving teaching certification, I began offering my students of Shin-shin-toitsu-do instruction in shodo. Like Shin-shin-toitsu-do, budo (“martial ways”), kado (“the way of flower arrangement”), and other classical arts, shodo is a Do, or “Way” to spiritual realization. In short, it’s more than mere brush writing.

Shodo has traditionally functioned in Japan as both fine art and moving meditation. As such, it is ideal for students of Shin-shin-toitsu-do or most any other type of meditation. Yet many Americans are intimated by the “foreignness” of shodo, and few Westerners grasp how it functions as effective dynamic meditation that can lead to deeper concentration, stronger willpower, and enhanced calmness. To counteract this lack of understanding, I authored a book on shodo called Brush Meditation: A Japanese Way to Mind & Body Harmony in 1999. And I hope this special article for the SMAA Newsletter will also lead to a greater appreciation of shodo and its spiritual components in the West.

The Origins of Shodo

Unfortunately for our four-eyed friend Tsangh-hsieh, when we reflect on science as opposed to myth, we get a somewhat different picture of the origins of Chinese characters. When considering archaeology, we find uncomplicated drawings engraved on pieces of tortoise shell and oracle bone dating from the Shang Period in China, which is regarded as being from 1766-1122 BC. These pictures on bone and shell were the archetypes of future Chinese characters.

Ancient Chinese shamans would bore holes in the shells and/or bones, which were then placed in a sacred fire. The surfaces of these objects would crack and split. The resulting fissures were deciphered by the Chinese priests, who etched their impressions of "The Voice of Heaven" on the bone or shell in the form of simple sketches. Eventually these pictographs were utilized for legal transactions, which were conducted via the exchange of etched strips of bamboo or wood. Later in China, these writings came into religious and official usage as bell inscriptions.

Skipping ahead in history, these inscriptions over time developed into the kanji, or “Chinese characters,” that most Japanese and Chinese are familiar with today. Various script styles, such as kaisho (similar to printing in English), gyosho (a semi-cursive script), and sosho (an abstract and fully cursive form of writing), eventually evolved.

During the Asuka (552-645 AD) and Nara (645-94 AD) periods in Japan, many elements of Chinese culture came to this island nation. Chinese characters also arrived on Japan's shores during this era. Initially the Japanese used the entire multitude of Chinese scripts, embracing quite a few of the Chinese readings while adding just as many of their own. Characters were later modified in Japan, and new scripts were born. During the fifth to tenth centuries in Japan, man'yo-gana or hentaigana, a cursive and abstract form of sosho, was developed as a sort of phonetic Japanese alphabet. It did not make use of the actual meanings of the Chinese characters upon which it was based. To arrive at a more standard usage, man'yo-gana, which has many variants, was simplified and organized to become contemporary phonetic hiragana.

An Ink Picture of the Mind

Even though the spoken languages and cultures of Japan and China differ greatly, they share a common set of Asian characters. It is important to note, that while these characters are definitely utilized to form a system of written communication, classical Japanese calligraphy should not be thought of as just penmanship. In light of the fact that Chinese characters began as simplified drawings or pictograms, it is evident that no clear-cut dividing line can be found between drawing, ink painting (suiboku-e or sumi-e), and calligraphy. Ink painting and shodo originally used the same type of brush, ink, and paper. Even certain brush strokes are similar. Shodo can perhaps most accurately be thought of as a system of writing originally based on abbreviated abstract drawings. In characters like mountain (yama), for example, it is still easy to see three distinct mountain peaks.

Kanji have transcended their utilitarian function and collectively serve as a visually stirring piece of fine art. Shodo allows the dynamic movement of the artist’s ki ("life energy" or "spirit") to become observable in the form of rich black ink. In great examples of shodo, you can sense both the rhythm of music as well as the smooth, elegant, and balanced construction of refined architecture. Many practitioners of this art feel that the visible rhythm of Japanese calligraphy ultimately embodies a picture of the mind, and accomplished calligraphers recognize that it actually discloses our spiritual state. This recognition is summed up by the saying: Kokoro tadashikereba sunawachi fude tadashii—"If your mind is correct, the brush will be correct."

Shodo and Mind and Body Unification

With a bit of thought, it becomes apparent that the mind controls and moves the body. Based on this same line of thought, it is equally clear that the actions of the body can serve as a reflection of the mind. Witness the slumped posture of someone who’s depressed and the shaking hand of a nervous student about to take an exam.

In like manner, in shodo the mind controls the brush through the hand, and the lines the brush creates on paper directly reflect the mind. In this way, shodo functions as an outward reflection of our mental state.

Some Japanese calligraphers and psychologists have written books on the examination of our personality through calligraphy. Just as American companies have employed handwriting analysts to help them select the best individuals for executive posts, the Japanese for hundreds of years traditionally expected their leaders in any field to display fine, composed script.

It is even said that health defects can also be revealed in the appearance of byohitsu, or “sick strokes.” This stems from the belief that brush strokes reveal the state of the body and subconscious mind—its strengths and weaknesses—at the moment the brush is put to paper. Historically speaking, it has also been held that the subconscious can be influenced in a positive manner by studying and copying consummate examples of calligraphy by extraordinary individuals. Japanese tradition teaches that by using this method, you can cultivate strength of character akin to that of the artist being copied.

Even today, some of Japan’s highest executives and politicians endeavor to develop the necessary traits for success by reproducing the artwork of an emperor or famous religious leader. At its ultimate level, shodo has historically been regarded as a means of refining your personality.

What’s more, most people want to realize their greatest personal potential. We want to be able to bring the full force of our minds and bodies to bear upon whatever we do in life. Yet for many of us, it’s difficult to coordinate the mind and body. The body may turn the pages of a book or the steering wheel of a car, but our minds are often elsewhere. Such lack of attention becomes visibly apparent in shodo, and thus Japanese calligraphy can serve as a means of learning how to unite the mind and body in harmony. Just as a car only functions well when the front and rear wheels move in the same direction, we can only display our full potential when the mind and body harmoniously work toward a related objective.

In shodo, our thoughts and our actions must match, and we must be able to direct the full, coordinated force of the mind and body into the artwork we create. Failure to do so causes characters to end up where we hadn’t intended, lines to nervously wobble, and the overall composition to lack power and grace. In essence, shodo offers Americans the same benefit it has traditionally offered Japanese—an immediate and visible barometer of mind and body unification.

Shodo for the West

Just as many Western people appreciate jazz, rock and roll, or blues without being able to read music, so can Americans appreciate shodo when they are properly exposed to it. Since shodo is an art form, it’s not strictly necessary to be able to read Chinese characters, or the Japanese phonetic scripts of hiragana or katakana, to admire the dynamic beauty of shodo. Within Japanese calligraphy, we find the essential elements that constitute all art: creativity, balance, rhythm, grace, and the beauty of line. While shodo is a fun way to learn about Japanese language, initial lack of Japanese reading ability need not be a barrier to shodo appreciation, and the above mentioned universal aspects of shodo can be recognized and admired by every culture.

Bringing the mind fully into the present moment, realizing a state of mind and body harmony, seeing directly into the real nature of the mind—all of this relates to meditation and all of these points are part of shodo training. Shodo remains one of ancient Japan’s most sophisticated arts of moving meditation.