Preface from Unlocking the Secrets of Aiki-jujutsu

By Davey, H. E.
This article first appeared in the Spring 1998 issue of the "SMAA Newsletter." 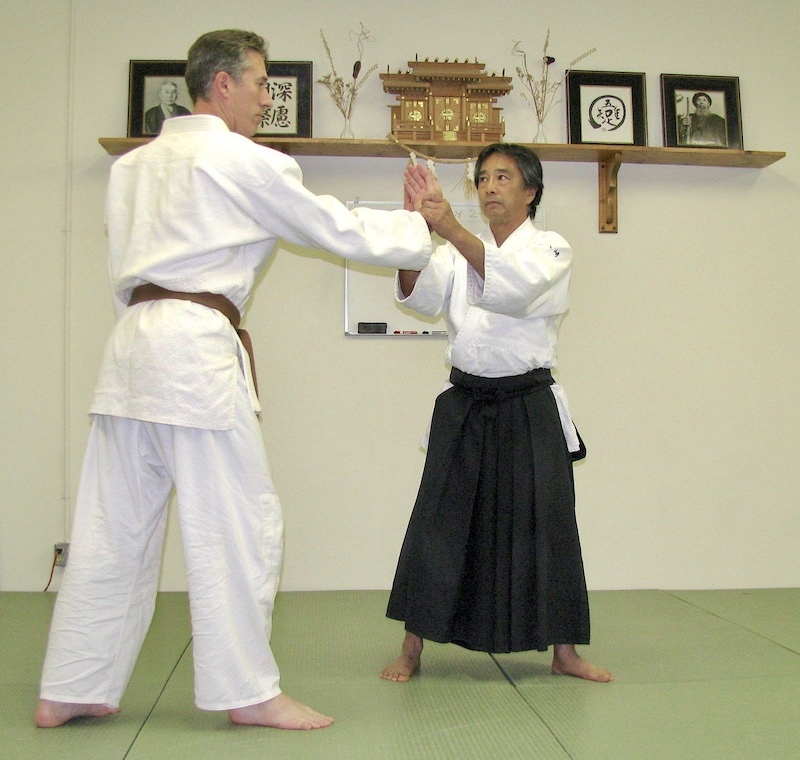 Aiki-jujutsu is a traditional Japanese combative discipline that has the potential to vitally transform the lives of its participants. This transformation takes place of course in the realm of one's newly developed skills of self-protection, but due to the nature of the art, it is also equally possible to experience profound spiritual realizations.

I was once asked by a skilled jujutsu instructor why I had "tacked on" this spiritual emphasis to what were essentially arts of combat, and if I had not added this dimension to the arts that I was teaching, why was this dimension there to begin with? In other words, why use as unlikely a medium as a martial art for spiritual development? Over the passing years, I have reflected on that question many times.

One of the essential issues that we have to deal with throughout our lives is the certainty of our own demise. Many of us have tried to put it out of our normal consciousness for many years, with the thought returning only occasionally--perhaps late at night while lying awake in bed, with no other activities to distract us from the inevitable outcome of life. It is a fear that never leaves.

Resolving this fear is something that is vital for any human being wishing to be at peace with him or herself. In fact, it is this fear which has prompted the great religions, philosophies, and teachings throughout recorded history, for by encountering this ultimate fear, we in turn face a number of our other anxieties as well. We are then forced to consider what lies beyond our limited physical form and discover our spiritual natures. We have come to see these related subjects, however, as being solely the domain of mystics and priests. At least, many of us find it strange to find them outside the sphere of philosophy and/or religion . . . especially in a martial discipline.

Still, what better place to encounter one's own mortality than in a combative art? It is the essential character of arts like aiki-jujutsu that they involve, ultimately, the potential death of one or both participants. This is not the same as facing death in the abstract--sitting alone with one's eyes closed, as in certain forms of meditation--but rather in the face of a rapidly approaching fist or weapon. In fact, if one does not come to grips with the true makeup of the human psyche and spirit, while at the very least, considering the issue of dying, it is impossible to make real progress in aiki-jujutsu. Of course, it is possible to cultivate technical skill and appear formidable within the relatively safe confines of the dojo, or "training hall." However, when faced with a sudden, violent, and potentially life-threatening attack, even in the dojo (but especially in daily life), few of us have the mental constitution to handle such an assault effectively. We will "freeze" unless the mind has also been deliberately and directly trained to deal with violence and the reality of human mortality. This mental training is absolutely essential for realizing genuine combative effectiveness, and it is not an issue that will simply "take care of itself " by engaging in hard physical practice, despite the fact that a number of martial arts teachers have tried to convince of the public of just that myth. (Otherwise, most professional athletes would have arrived at these spiritual realizations in the course of their training as well.)

Beyond combative efficiency, aiki-jujutsu gives us the opportunity to see ourselves clearly and to face our own fears in a way that few people in modern society will ever experience. Actually, when deeply and properly practiced, aiki-jujutsu promotes an inevitable spiritual examination. Furthermore, if one explores any combative discipline long enough and seriously enough, it is actually impossible to fail to face one's anxieties, fears, and mortality. These are not issues that have been "tacked on" to the Japanese martial arts and ways, but are inescapable aspects that lie at the very heart of these disciplines.

Nonetheless, one still needs a proper understanding of aiki-jujutsu to grasp the art's deeper dimensions. No amount of effort, if it is misguided, will allow most people to unlock the mysteries of aiki-jujutsu; and therefore, authentic instruction is vital. This book is designed to serve only as an introduction to a dynamic and infinitely subtle martial discipline.

The first half of Unlocking the Secrets of Aiki-jujutsu is designed as an overview of aiki-jujutsu in general, while the second portion illustrates the techniques of Saigo Ryu, since this is the system of aiki-jujutsu with which the author is most familiar. Moreover, the techniques depicted in the book are only a representative sampling of the skills taught in Saigo Ryu aiki-jujutsu. (While one chapter explains a limited number of techniques in detail, it was not possible to continue this detailed explanation throughout the book due to space limitations. However, the following chapter does shows a fair variety of techniques but without explanation. This is, once again, due to space constraints.) They do not depict this system's official kata, or prearranged formal exercises, which form the foundation of most aiki-jujutsu methods. (They are actually individual techniques drawn from various dissimilar kata and kata no oyo, or applied techniques that are derivative of those official kata techniques.) This is deliberate, as charlatans in the past have attempted to learn one of Japan's martial arts or ways from a book and bill themselves as instructors of disciplines that they have never studied. The credentials of individuals claiming to teach Saigo Ryu aiki-jujutsu can be checked by contacting the author at the address given in the appendix.

With the increasing international popularity of aikido, a martial way that is derived from aiki-jujutsu, aiki-jujutsu itself is being drawn into the limelight. However, aiki- jujutsu is a practice that was not readily available to the public for most of its history, and this situation has only recently begun to change. Thus, the amount of reliable information about the art is limited, but the public's interest in this art is steadily growing. Clearly, any little-known art that has managed to gradually capture the attention of the public is in danger of being exploited, distorted, and/or misunderstood. This has, unfortunately, already started in the case of aiki-jujutsu . . . before it has even had a chance to establish its legitimate principles. Hence, the need for a comprehensive, English-language introduction to the art is vital, and I have written this book for this reason, and because a number of senior Japanese and Western martial arts teachers have requested such a book.

Aiki-jujutsu's essence is contained in its name. Ai means "to meet," or alternately, "harmony" and "union." Ki describes the vital life energy that animates all living things as well as all of Nature. Ju can mean "gentle," but in this context it is more readily translated as "yielding," "flexible," or "non-resistant," while jutsu indicates an "art." Thus, in aiki-jujutsu, one discovers an art with which to master conflict by means of harmonizing with the life energy that animates the opponent and pervades Nature. Through this all-embracing state of harmony, then, it is possible to overcome an opponent, or even to face the "tests" life continually sends our way, by arriving at a state of non-resistance. This state, however, is not passive but actually extremely dynamic. For example, imagine trying to push a ping-pong ball under the water with one finger. The ball will seem to yield to the force of the finger, only to whirl away and pop up out of the water again and again. Its unsinkable quality comes from non-resistance, not passivity. Through the study of genuine aiki-jujutsu we can become like this floating ball, responding quickly and flexibly to life's changes, yet never being overwhelmed by them.

This book by Mr. H. E. Davey, Kokusai Budoin U.S. Branch Director and SMAA Jujutsu Division Director, was released in July 1997. It is published by Masters Press (a division of NTC), and it is an 8 1/2 X 11 paperback, 156 pages in length, with hundreds of photos. The introduction to Unlocking the Secrets of Aiki-jujutsu was written by Sato Shizuya Sensei, Kokusai Budoin World HQ Chief Director.

Suggested retail price is $17.95, and it is available wherever fine books are sold. SMAA members can order copies of the book by calling 1-800-9-SPORTS.