By Muromoto, Wayne
This article appeared in the Spring 2006 "SMAA Newsletter" 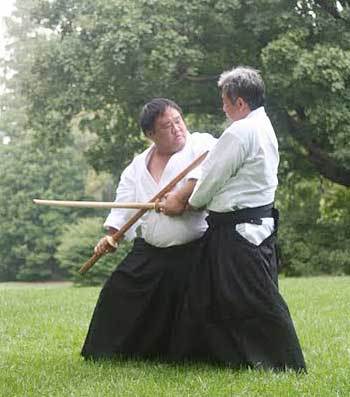 In the Takeuchi Ryu, the term "jujutsu" is used generically to define any methods that involve unarmed grappling methods. In actuality, various types of methods were meant for different situations, and they were often given different names based on their techniques, end goals, and applications.

Jujutsu is more properly used than the Westernized word "jujitsu," which in Japanese characters, doesn't really mean anything. It's only one letter in English, but will change a whole Chinese character in Japanese. Jujutsu means the method (jutsu) of suppleness; not necessarily yielding or weakness. The "ju-" is the same character as that used in judo.

One should make a distinction between the various classical jujutsu styles, as well as differentiate between gendai, or modern, jujutsu and classical (koryu) jujutsu. Whether or not any one particular system is inherently better than another is a matter of opinion, and of course it will vary from practitioner to practitioner. However, this does not necessarily mean we should leave our judgment at the door. We should assess each and every martial art we encounter and quickly size up the technical worth of that particular ryu. Modern jujutsu, or "jujitsu" schools, as they label themselves, tend to be somewhat simplified, and sports and/or self-defense oriented. On the other hand, some classical koryu jujutsu schools may have become little more than shells of their original due to the low level of their subsequent teachers.

Most such “jujitsu” schools in the West are based upon some rudiments or subsets of Kodokan judo, developed further by the founders of those schools. Therefore, in my opinion, they display markers that to a discerning eye, can place the techniques as derivative of judo. That is not to say that they are ineffective, as classical judo itself was derived from koryu jujutsu, distilled and refined into what I would say was the "best of the best" techniques for tournament contests.

Classical koryu systems will, in contrast, often (but not always) look and sound quite different from Kodokan judo. Some, meant for foot soldiers, may have very effective but crude-looking methods. Others, developed for upper class samurai, may appear refined and subtle. Some koryu jujutsu may include only fighting methods for military purposes. Others may include kata for self-defense or early sports jujutsu (which is sort of like roughhouse judo).

In my opinion, not all classical jujutsu systems as they are presently taught are reasonably effective enough to warrant study. On the other hand, not all modern jujitsu systems are as effective as they may claim to be, contest and sports wins notwithstanding. Just because a jujutsu or "jujitsu" is modern or classical, lower class or higher class, doesn't mean that it's a guarantee of success or quality of methods.