By Fabian, Stephen
First published in the Winter 1995 issue of the "SMAA Newsletter" 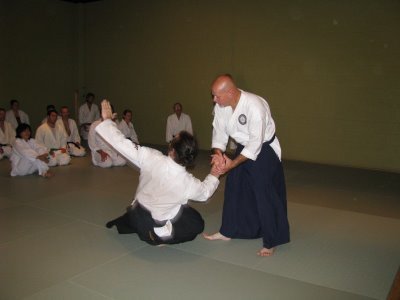 With these formal expressions of courteous request and gratitude, students of Hontai Yoshin Ryu jujutsu begin and end, respectively, their paired training in jujutsu kata. The words accompany humble bows made from the traditional seiza, a kneeling position in which one's buttocks are settled onto the heels of upturned feet. This exchange is indicative of the nature of Nihon--truly Japanese-- jujutsu.

Traditional jujutsu is either a koryu, or ancient style of Japanese martial art; or a shinryu (new ryu). The koryu can be thought of as martial traditions/methodologies that originated before the abolition of Japan's feudal bushi, or samurai, system in 1868. Shinryu are martial systems that are directly derived from bona fide koryu. However, combative methods which stem from (for example) a contemporary composite of karate-do and judo, and which are not derived from Japanese koryu jujutsu, cannot be considered shinryu. While a limited number of shinryu jujutsu systems do exist, most authentic jujutsu, which is only taught in Japan on a relatively limited basis, falls into the koryu category.

Although there were, and are, many ryuha, or systems of Japanese jujutsu, certain features exist that are characteristic of most (if not all) of them. Since there seems to be a number of relatively new martial systems of questionable origin identifying themselves as jujutsu these days, it is appropriate to look at those characteristics which distinguish a style as traditional Japanese jujutsu.

All Nihon jujutsu will have a verifiable history and ryu lineage, including a list of past ryu heads, or soke. These details are often contained in the system's makimono (scrolls) or are otherwise recorded. (Unfortunately for most Americans, such information is hardly helpful since the script in which it is recorded will be unintelligible.) Other cultural indicators, which can help give one a sense of the traditional character of a school, include:

Although there is some diversity in the actual look and techniques of the various traditional jujutsu systems, there are significant technical similarities:

Although jujutsu and the koryu in general, with only a few exceptions, do not have the suffix -do or " way" to designate them as paths toward spiritual liberation and inner development, there are often many philosophical and mental components which have significance and application in these systems, at least because of their value in developing the actual combat effectiveness of the practitioner. These include:

Together, these states of mind/being tremendously strengthen the jujutsu practitioner, allowing him/her the utmost potential for effective action. Such effectiveness and the technical competence and mental mastery on which it stands, however, is possible only after a considerable period of serious and devoted training, a veritable forging of the spirit as expressed in the concept of seishin tanren, or "spiritual forging."

These various characteristics or components, taken together, largely describe the principal elements of traditional Japanese jujutsu. Alerted to them, a student will have some reasonable ability to assess the relative traditional nature and authenticity of a system of jujutsu. If most, or all, of these characteristics are not noticeable in a so-called jujutsu system, then the legitimacy of the system as bona fide Nihon jujutsu is highly suspect. This is not to say that the system or school in question does not offer a good training program or effective techniques. It simply suggests that such a "jujutsu" school or system may be more accurately labeled with some other term.

For anyone who has a question on the authenticity of a Nihon jujutsu system, H. E. Davey Sensei, who directs the Traditional Jujutsu Division of the Shudokan Martial Arts Association, can help to determine a given school's or system's legitimacy if given sufficient information.