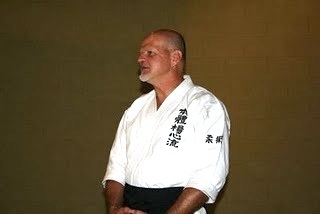 Anthropologist Stephen Fabian Sensei has been involved in the Asian martial arts for most of his life. Dr. Fabian lives in New Jersey and trains in classical Hontai Yoshin Ryu, a ryu that specializes in jujutsu and the study of classical weaponry. He resided for several years in Japan and is a direct disciple of Inoue Soke, the 18th generation Headmaster of the Hontai Yoshin Ryu. Fabian Sensei has received a high-level teaching certification from Inoue Soke in Hontai Yoshin Ryu. He is believed to be the first American ever licensed to teach this ancient ryu in the U.S.

Dr. Fabian also studied Hontai Yoshin Ryu and Toyama Ryu iaido in Japan. In November 1989, he became the Toyama Ryu Iaido All-Japan Champion in the Men's Shodan/Nidan Division. Fabian Sensei is a Division Director in the SMAA Traditional Jujutsu Division. His current SMAA title/rank is jujutsu Shihan/seventh dan, and he has a fourth dan in the SMAA Iaido Division.