Fudoshin and Its Continuing Relevance

By Fabian, Stephen
First published in the Spring 1997 issue of the "SMAA Newsletter" 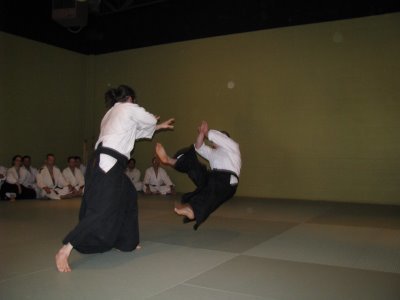 Sparkling crystal clinked with seasonal good cheer as the revelers toasted each other. Garbed in gowns, suits, and other formal evening wear, the foreign ministers, diplomats, and general VIPs and their spouses basked in the light and warmth of fellowship and bounty at the gala event. Suddenly an explosion shook the assemblage, bursting the dreamlike party image and replacing it with a nightmare, like the twisted plot of a cinematic thriller. Gunfire erupted stark and loud and was met by shouts and screams, and the mass of nearly 400 people milled about confusedly. Doors burst open and shots cracked over their heads, sending the guests headlong to the floor. Armed and masked guerrillas swarmed through the official residence.

"Everyone down," came the snarled command, "and don't raise your heads unless you wish them blown off!" Screams were nearing hysteria. "Silence!"

The shots and shouts subsided, replaced by an electrified quiet punctuated with stifled sobs. Fatigue-clad men glared ominously over the inert horde, and then leveled their weapons at an unexpected sight: one VIP remained standing, visibly unshaken by the violent infiltration.

A rebel moved closer, shoving the still-warm barrel of his gun towards the his face. "Who are you?"

The man faced gun-barrel and glare without flinching. "I am Morihisa Aoki, ambassador of Japan." His voice was forceful and unwavering. "These are my guests, and they are unarmed. You will respect them and cause them no harm."

Awed, the guerrillas' eyes widened, and for a brief moment fingers tensed on triggers. But bold themselves, the guerrillas could admire grudgingly the courage of their captive. The rebel leader nodded. "All right. No one will be harmed." Guns were lowered, and an audible sigh spread among the hostages.

Fudoshin. This is a Japanese expression based on the Buddhist guardian figure Fudo Myo O, who is unflinching in his defense against wickedness. Figuratively translated, fudoshin means "unmoving mind/heart"or "immovable mind," and connotes the imperturbability as well as courage of the truly mastered self. It is the mind/heart from which have been purged all impurities and weaknesses in the resolute process of forging artistic and self-mastery. While historical examples of the demonstration of fudoshin in Japanese monks and warriors are not uncommon, the above scenario is not from Japan's feudal and relatively isolated past, but from its contemporary and international present.

The scene described is based on newspaper reports of the takeover in Peru of the Japanese ambassador's residence by Tupac Amaru guerrillas during an evening Christmas party on December 17, 1996. Although I know nothing of the Japanese ambassador's past or training, it is clear that he is a man who has learned to govern his thoughts, words, feelings and actions. He has discovered self-mastery, and has applied it strategically and intelligently to help bring an explosive and potentially deadly situation under level-headed control.

This model of courageous dignity and calm leadership is the direct application of fudoshin, and is a model that we who train within traditional Japanese martial systems, and as members of SMAA, would do well to try to achieve and emulate. The Japanese warriors and masters of old, in pursuing mastery of technique and form, recognized that such mastery was inextricably linked to mastering the self. Not only is true mastery in the application of form and technique possible only with a deeper knowledge of the self, but it is through the long and challenging process of mastering an artistic "way" that the self can, and must, also be mastered. Traditional arts, learned in traditional ways--ways that emphasize long and rigorous training, the tempering of immediate wants and needs, and the internal fortitude to successfully meet and exceed these challenges day after day, year after year--are prescriptions for mastering technique, form, and self.

I do not know what traditional arts or ways Aoki Sensei studied in the process of his personal development. But his adeptness is evident and a worthy model for us all. As one freed fellow hostage was quoted as saying, "In a nightmare of this magnitude, you need a hero, someone with special valor . . . That's what ambassador Aoki . . . gave the rest of us. [He] showed us what dignity meant." (As quoted in the Louisville, KY Courier-Journal, Wednesday, January 1, 1997, p. A7.)

It is a model we all need, and not only in such a crisis, but as a model for everyday dignity and rectitude, courage and honor. A model with which to face the moral challenges, personal choices, and interpersonal relations and conflicts of our everyday lives. It is a model that is achievable through long, consistent, diligent, and selfless training in a traditional Japanese art or way.