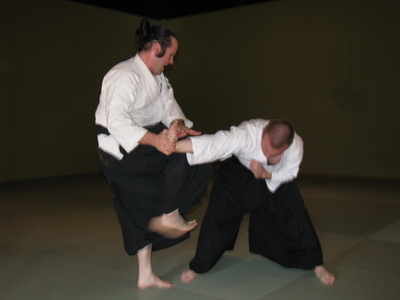 As with previous SMAA Seminars, I enjoyed the training at the 2007 SMAA Seminar & Conference in Nebraska very much. It was unfortunate that I could bring only one student, but I intend to make this an annual event with whoever can come along. I find the level, depth, and comprehensiveness of the training at these seminars incredibly inspiring and instructive. It is also helpful for me to receive instruction multiple times in blocks of key ideas and movements. Since I trained before with each of the presenters at this year's seminar, I was particularly pleased to gain new insights into familiar movements and concepts.It was truly a treat to receive instruction again from Dave Lowry, SMAA Senior Advisor.

On Saturday and Sunday, he offered instruction in the use of the bokken, or “wooden sword,” as a way of understanding Japanese swordsmanship and martial arts in general. Mr. Lowry’s writings have been inspirational to the martial arts community at large, and me in particular, for so long that it is fascinating to see the man and get multiple perspectives on his approach to bujutsu. In particular, I enjoy his directness and uncompromising strictness. These attributes are doubtless the products of long years of training in the classical martial arts as they have been and should be practiced. Mr. Lowry’s perspectives on budo are often controversial for practitioners of more modern styles; I find this both entertaining and educational, which I believe is his purpose. His approach to the sword was different from the other sensei there, and the contrasts were easily as educational as the commonalities. I have co-opted a number of Mr. Lowry's drills for my own classes, and I know that his instruction was particularly enlightening for my student, Elizabeth Irish, whom I believe may now have become one of Mr. Lowry’s groupies. She will have a large stack of newly-purchased volumes for his signature at their next encounter.

Nicklaus Suino Sensei's style of teaching is as unwavering as the gentleman's discussed above, and I was delighted to learn a small amount of Muso Jikiden Eishin Ryu iaido from him. Like the other sensei, he taught on both Saturday and Sunday.  I am always interested in other people’s paths along the way, and Suino Sensei (SMAA Iaido Division seventh dan) is a strong example in both his books and in person. Much of his character is apparent in the comportment of his students, who were wonderful help to everyone at the seminar. Helpful and humble sempai (“seniors”) are always welcome and necessary in such an environment, and it exemplifies Suino Sensei's larger lessons for the group that his students reflected so well upon him and his tradition. I am pleased to report that I had a series of small breakthroughs in my own practice of iaido thanks to the suggestions and instruction from Suino Sensei at the 2007 seminar in Omaha and the 2006 event in Ann Arbor. I know as well that Elizabeth learned a great deal from Mrs. Pamela Suino and commented upon the strong and warm spirit she felt working with her.

It is nice when one finds affirmation of long-held beliefs in the work of another. I feel this way when I read H. E. Davey Sensei's books and hear him lecture on Japanese yoga as well as Saigo Ryu aiki-jujutsu. He kicked off each day’s training with a class in the Shin-shin-toitsu-do system of Japanese yoga and meditation, complete with its message of mind-body unification and universal harmony. Davey Sensei, SMAA Jujutsu Division seventh dan, followed this with instruction in Saigo Ryu, explaining how its various weapons relate to its unarmed jujutsu.

I was particularly struck by Davey Sensei's message of positive growth in the second day of training, and it prompted me so strongly to act that I made a series of phone calls during a break, which precluded me from attending the later sessions and prompted our leaving early in order that I might share Davey Sensei’s teachings with others who needed them badly back home. Since my return to Kentucky, the success of my endeavor is mixed, but my commitment to a perspective of positive change and constant refinement remains. I also purchased Davey Sensei’s new book The Japanese Way of the Artist in order that it may inform some of my work in the humanities and philosophy departments here in Louisville. But I digress.

Additional instruction in Japanese yoga, movement, and the Saigo Ryu weapons familiar to Davey Sensei, when combined with his excellent lessons on martial paths as life paths, was profoundly powerful. I could go on and on, but I won't, at least not here. Thank you for the instruction, Sensei.

Like the 2006 SMAA Seminar & Conference in Michigan, a strong group dynamic was cultivated at the party on Saturday night. One of the unique and truly special opportunities of these seminars is the chance to interact with the presenters and students in an informal atmosphere. Overall, I had a very positive experience. I will continue to attend SMAA events with my students, and I will continue to support the SMAA in any way possible.

If any SMAA members reading this have not been to an SMAA Seminar & Conference, make every effort to attend the next one. The benefits are enormous.