By Burklund, Richard
This article first appeared in the Spring 2004 "SMAA Newsletter" 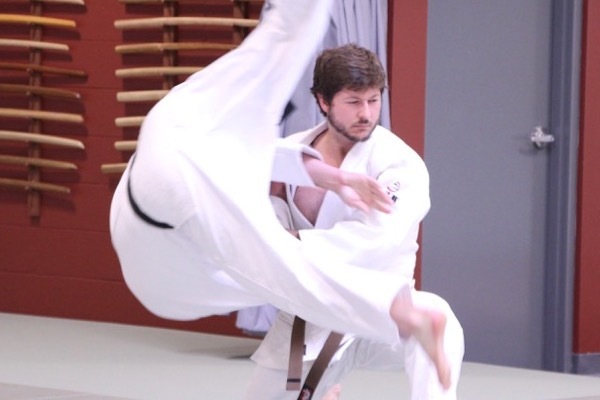 My recent retirement from the Army precipitated an unexpected existential crisis. It caused me to review my life and ask myself certain fundamental questions. Have I served well? Have I upheld and personified the principles that I hold most dear? Was I a good man? A good soldier? As the object of judo training is to achieve balance, growth, and harmony in life, and because judo is a spiritual and personal discipline, I decided to reflect on where I’d been to better discern where I’m going. I hope that these insights will be of value to others…

I first read the novel, Once an Eagle, by Anton Myrer, in the summer of 1969. It is the story of an American soldier; a career officer who serves during both war and peace and who personifies the highest martial values. I was both entranced and inspired by it. This book would become the essential road map of my life. I’d join the Army, win World War I, then World War II, and then we’d deal with whoever else needed their butt kicked. I would be the next Sam Damon. Imagine my surprise when I discovered that they’d already done all that without me! Nevertheless, this was my dream.

In the summer of 1970, I found “the Way." I began my study of judo and found it to be a lifelong joy and the subject of endless fascination. I was fortunate to first learn from a great technician and kind human being, Otaka Shuichi Sensei, at the Northglenn Judo Club in Colorado. In judo I had found a physical activity that inspired and improved me, and which I also found to be intellectually stimulating as well. My study of judo and my inspiration to be a soldier would combine to carry me forward in life. Judo helped make me into the soldier that I became by teaching me balance, perseverance, and flexibility.

As time and my judo training progressed, I found myself attracted to the profound philosophical aspects of judo. I considered this co-equal in importance with technical training for reasons that I couldn’t quite explain at the time. I had read Donn Draeger Sensei’s three-volume work The Martial Arts and Ways of Japan and was deeply impressed by it. In studying this and the 1956 version of The Illustrated Kodokan Judo, I came to feel that my training was lacking in the essential skills that I needed to become a complete American warrior. I read that kata was a key element of effective martial training and I could see in The Illustrated Kodokan Judo that the forms included practical training in attacks and defenses. Furthermore, I was told of the important mental strength that such training could give. I wanted to study kata but was told that kata was “for old men”. I persisted.

At that point I began to drift away from the “sport oriented” judo organizations. In some ways this was unfortunate for me because the positive aspects of hard physical training, the development of superior technique through practice, and the honest self-examination offered by participation in randori (“free practice”) and shiai (“competition”) espoused by the sport enthusiasts are worthy features of their practice. I believed that while these were valuable by-products of training, they were not the ultimate goal of training. I further believed that judo was an effective martial way for self-defense and self-perfection, and I stubbornly stuck with this interpretation of judo rather than switching or compromising.

Therefore, I felt that it was necessary for me to take the path to classical judo, as I understood it according to Draeger Sensei, et al. This was especially important to me as I began my military career. I sought a martial way that would be an essential building block to becoming an effective soldier and officer

This mental and physical training in judo helped me more than I could have expected. I served with light infantry and special operations forces, which I found both challenging and exciting. Going days without sleep or food, carrying staggering loads of arms, ammunition, and equipment, through the harshest terrain and weather conditions while trying to lead and motivate other soldiers I found myself relying on the strength and confidence that I had gained from judo training.

Time after time I was able to call on lessons learned from judo to help me as a soldier and as a leader. Years later, as I entered more senior leadership positions, I also found judo helpful. I tended to view and respond to leadership challenges and tactical situations in a “judo way”—with balance, flexibility, and by making the best use of my (and my soldiers’) powers.

The three pillars of my life have been my family, the Army, and judo. Now, after over 20 years of service, I am retiring from active duty. I find it difficult to accept the fact that I’ll no longer be an “action guy,” particularly when we are still at war. Being a soldier is not just something that you do, it is something that you are. That is why I find it so difficult to let go. This is true of being a judoka as well. I have just undergone major orthopedic surgery for the fourth time in my career. As souvenirs of military service, I have a steel pin in my ankle, torn ligaments in my knee, a torn rotator cuff, and two ruptured discs in my back.

Because of this, I can no longer run for aerobic exercise, nor do many other strength-training exercises as I have previously. What frightens me the most is that I may not be able to practice or teach judo or jujutsu (which I also practice). Even if I can practice, my ability to perform properly or even well at all is going to be severely limited. I am reluctantly prepared to retire from the Army, but I cannot live without judo. I’ll continue in whatever way that I can.

Insights from a Lifetime of Budo

Since it is the duty of old warriors to teach young warriors how to become old warriors themselves, I shall continue to pass on what I’ve learned. And what exactly is that?

·        That there is a personal evolution of training from bujutsu (“martial techniques”) to budo (“martial way”) to bushin (“martial spirit”). Practice of physical technique becomes the vehicle to approach the two higher levels of ethical behavior and spiritual insight.

·        That “ju”, the flexibility of body, mind, action, and response, requires a connection to the opponent both as a physical feeling and as a mental state in order to feel his strengths and weaknesses, to blend with his direction of attack and then control it. This enhanced awareness and sensitivity to others leads to greater empathy and ultimately to the making of better a human being. Conflict can be minimized or avoided through this greater empathy; or more efficiently dealt with if conflict is unavoidable.

·        That for the leader imbued with ju, his greater insight into the mind of an opponent results in the ability to predict his actions and take steps to shape the battle, gain decision superiority, maneuver decisively, and control his opponent.

·        That kan, or “intuitive perception,” goes hand in hand with ju and enables the leader that has experienced this ability to perceive feelings, emotions, and sentiments through his budo training to then exercise committed, caring, and compassionate leadership of his troops, his students, his employees, or his family. Leadership is a difficult balancing act: “Mission first, but men always”. Ultimately, it is an art involving complex human emotions. You must look and feel deeply before you make decisions and take actions that affect people’s lives. The essence of command is to lead not to drive. Only genuine leadership can motivate soldiers to success in combat or people to success in daily life.

·        That if you are lucky enough to develop the imperturbable spirit of fudoshin—“immovable mind”—you will inspire confidence and optimism through your example of calm leadership and skillful decision-making during crisis. There may still be several “dark nights of the soul,” however…

Reflecting on the Past, Moving Toward the Future

Being a soldier is a true profession and a way of life. It demands ultimate commitment, and discipline and sacrifice beyond that of ordinary professions. You must develop a “warrior ethos”—a set of values or guiding beliefs. These values should include: Honor and Integrity—doing what is right, ethically, morally, and legally; Courage—overcoming fear, danger, or adversity, both physical and moral; Duty—fulfillment of obligations and acceptance of responsibility for your own actions and those entrusted to your care. The true soldier, guided by a genuine warrior ethos, will dedicate his life to constant study and practice of the skills necessary to wage war. A leader of soldiers will be ever mindful of the awesome responsibility he carries. He must not misuse his soldiers; he must not fail in his mission or in upholding his sacred oath…

Being a budoka is likewise a true and unique way of life. It demands ultimate commitment, discipline, and sacrifice beyond that of ordinary activities. You may also choose to develop a warrior ethos—a set of values or guiding beliefs, if you follow the path diligently. These values will also include Honor and Integrity, Courage, and Duty. The true budoka, guided by a genuine warrior ethos, will dedicate his life to constant study and practice of the skills necessary for self-improvement. He will be ever mindful of the awesome responsibility he has to continue and to uphold the living tradition he is heir to.

Sato Shizuya Sensei, judo ninth dan, has said that through judo we learn to maintain both physical and emotional balance while gaining in insight. The true test of a student's understanding of budo is in the way they live their life and by their actions. The contribution a person makes to society is the true measure of their mastery of “the way of flexibility” (judo). I’ve still got a long way to go to true insight, let alone mastery. But the shadows on my path help to illuminate the way ahead.