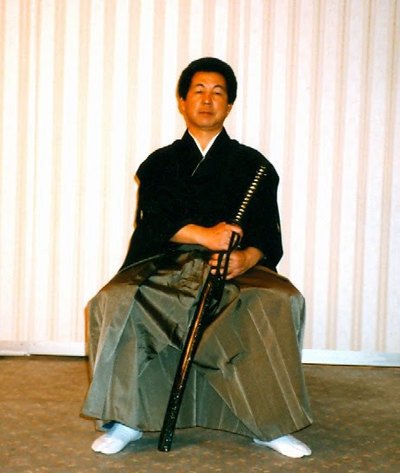 Hanshi/eighth dan and an expert in Nakamura Ryu sword arts.

Suzuki Kunio Sensei, Nakamura Ryu swordsmanship Hanshi, eighth dan, and SMAA Senior Advisor is one of the highest ranking teachers of traditional martial arts in Japan, if not the world. He is a direct student of the late Nakamura Taizaburo Sensei, founder of Nakamura Ryu, tenth dan.

Suzuki Sensei lives in Yokohama, and we are honored to have him on our board of advisors. He joins many other prominent martial artists in Japan, Europe, and the USA, who serve the SMAA without pay. Their devotion to budo and koryu bujutsu is the hallmark of the Shudokan Martial Arts Association.

Suzuki Sensei first started in budo with the study of Wado Ryu karate-do, training under legendary experts in Japan. He rose through the kyu ranks, eventually earning black belt degrees in Wado Ryu before deciding to devote all his efforts to Japanese swordsmanship. He has become one of the highest ranking teachers of iaido (battodo) in the world.

In addition to his training in budo, Suzuki Sensei has received high-level teaching certification in the ancient art of the shakuhachi flute. Long associated with Zen meditation, the shakuhachi is one of Japan's most important cultural arts. Suzuki Sensei feels that the study of such arts can aid martial artists in having a deeper understanding of budo. This viewpoint is shared by many of the leaders of the SMAA, which is why experts in Japanese yoga and meditation, flower arrangement, tea ceremony, brush calligraphy, and other disciplines can be found among members of the SMAA Board of Directors and Board of Advisors.

Suzuki Sensei's desire to join the SMAA validates the unique and important work our association is doing to promote and preserve genuinely traditional Japanese martial arts and ways. The presence of people like Suzuki Sensei and Omi Koji Sensei (former Japanese Finance Minster and member of Japan's House of Representatives) among our leaders gives added weight to the ranks that our members can receive from the various SMAA divisions. They also serve to further emphasize the international nature of the SMAA and our group's close ties to Japan and the classical Japanese martial arts community.