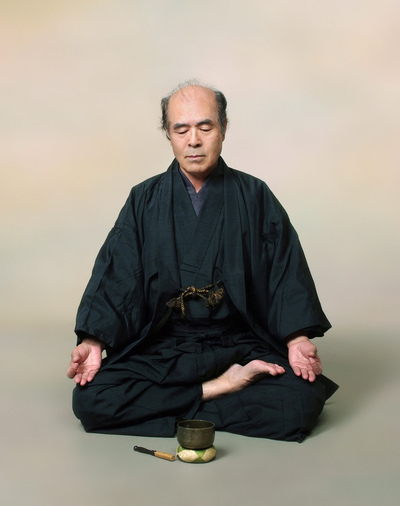 Sawai Atsuhiro Sensei, SMAA Senior Advisor, is an expert in ancient Kobori Ryu suiei-jutsu. Suiei-jutsu is the time-honored Japanese technique of swimming and combat in water. Sawai Sensei started learning this martial art in Kyoto after World War II. He has received the rank and title of Kobori Ryu Shihan, the highest rank available in this form of suiei-jutsu.

Kobori Ryu suiei-jutsu is a koryu, or "ancient martial tradition." Unlike modern budo, such as judo, karate-do, or iaido, the old martial systems were often sogo bujutsu. A sogo bujutsu incorporates a number of martial disciplines that are linked by a set of unifying principles as espoused by the art's founder. While not all bushi, or warriors, studied every one of them, generally speaking there are 18 classical martial arts that often comprise sogo bujutsu. Although the exact arts that made up the bugei juhappan, or 18 martial arts, varied according to martial system, and sometimes according to historical period as well, suiei-jutsu is frequently described as being one of them.

Suiei-jutsu served various purposes, ranging from silently sneaking up on an enemy, to floating for long periods, to fording strong rivers. Bushi needed to be able to swim while wearing armor, carrying flags, weapons, and banners; and they needed to be able to use a bow and arrow while almost submerged. Some ryu also featured grappling while in the water.

Fumi-ashi was a method of treading water from which many others methods emerged. To leap from the water into an enemy's boat, some suiei-jutsu systems practiced inatobi. And ashi garami allowed the bushi to entwine an opponent's leg while grappling. This would force the opponent to either give up or drown.

Sawai Sensei also has training in Hakko Ryu jujutsu. Hakko Ryu is one of the modern forms of Japanese jujutsu, although it's training format is traditional. However, the art form that has had the greatest impact on Sawai Sensei's life is Shin-shin-toitsu-do, a form of Japanese yoga and meditation.

Sawai Sensei's aunt suggested that he attend the lectures of Nakamura Tempu Sensei, the founder of Shin-shin-toitsu-do. He began to study with Nakamura Sensei, and he felt awakened by the principles of mind and body unification that he taught. This took place in 1958.

In a short time, after beginning to practice Japanese yoga, Sawai Sensei's health dramatically improved. He continued learning the philosophy of mind and body unification from Nakamura Sensei for 11 years until he passed away in 1968.

Sawai Sensei eventually became a full Lecturer for the Tempu-kai, which is the highest teaching credential issued by this group. He became a Councilor for Tempu-kai and Tempu-kai Branch Manager of Kyoto in 1998. In 1999, he became Director of Publishing for Tempu-kai and Editor of their magazine Tempu. He also wrote regular articles for this publication.

Sawai Sensei was a full professor of English at Kyoto Sangyo University for 23 years, and he taught at the university for 33 years. He entered semi-retirement and became Professor Emeritus of English in 2004. He has also had the following books published:

Sawai Sensei's teacher, the founder of Japanese yoga, was also an experienced martial artist, with training in Kodokan judo and kendo. However, his greatest skill was in ancient Zuihen Ryu swordsmanship, the one martial art he continued to practice throughout his lifetime. Because Nakamura Sensei's Japanese yoga emphasized the development of ki ("life energy"), a concept valued in budo, and because of his emphasis on coordination of mind and body, numerous budo experts came to study with him as a means of improving in the martial arts. Although Nakamura Sensei did not teach budo, his Japanese yoga proved valuable to people studying budo and koryu bujutsu, and as the result, a number of Japan's top martial artists flocked to his dojo. Owing to his background in budo, he was able to teach them in a way they could relate to. And owing to his friendship with the founder of aikido, many aikido teachers studied Shin-shin-toitsu-do, including Tohei Koichi Sensei, aikido tenth dan.

Sawai Sensei has written articles for the SMAA Journal about mind and body unification principles that develop ki. He relates these principles not only to daily life but to budo and koryu bujutsu as well. Such information is rare outside of Japan, as Nakamura Tempu Sensei's writings have never been translated into English.