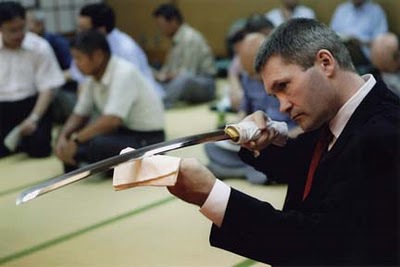 Martin Sensei lives in Japan, where he is one of the world's leading experts in the art of the Japanese sword.

Paul Martin Sensei is a Japanese sword specialist. A native of England, he lived in Japan for many years, where he studied kendo, iaido, and several forms of ancient swordsmanship, including Ono Ha Itto Ryu. But his main area of speciality is the study, history, and appraisal of the Japanese sword as an art object. He is one of the world's foremost scholars of the Japanese sword, and we're honored to have him as an SMAA Senior Advisor.

Martin Sensei has studied under top sword appraisal experts, sword smiths, and sword restorers in Japan for numerous years, and this is to say little of his budo background. He maintains a fascinating website www.thejapanesesword.com and he is the author of The Japanese Sword Guide to Nyusatsu Kantei, which can be purchased at his site. He has been featured on the BBC, BBC Radio 4, the History Channel, Los Angeles JATV, and Japan's NHK TV. He has been interviewed in Tokyo Metropolis Magazine, The Daily Yomiuri newspaper, and Asahi Weekly in Japan. You can see video of many of these interviews at the site above.

Martin Sensei has contributed articles for the SMAA Journal about the Japanese sword as an art object, its valuation and appraisal, and its history. He provides a unique perspective on the sword and budo, as he is both a martial artist and a sword scholar.