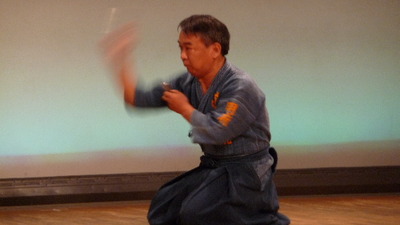 Otsuka Yasuyuki Sensei, the current Soke (Headmaster) of Meifu-Shinkage Ryu, is a member of the SMAA Board of Advisors. Meifu-Shinkage Ryu is based on Katori Shinto Ryu, one of Japan's oldest forms of koryu bujutsu. Meifu-Shinkage Ryu specializes in the use of shuriken (throwing stars and darts) and the fundo kusari, a weighted chain. Otsuka Sensei, a published author of budo books, is one of the highest ranking martial artists in Japan and one of very few people in the world teaching an authentic system of shuriken-jutsu. His desire to join the SMAA points to the value of the work our group is doing internationally to promote and preserve genuine Japanese budo and koryu bujutsu. He lives in Ichikawa-Shi, Chiba, Japan and teaches throughout Japan, Europe, and the USA.

The SMAA is active around the world and lead by both Western and Japanese martial arts experts. Otsuka Sensei joins a number of prominent martial arts teachers in Japan, who actively support our association and validate the ranks issued by the SMAA. Their presence in the SMAA speaks volumes about the importance of our group and the degree to which it is respected in Japan, the birthplace of budo and koryu bujutsu.