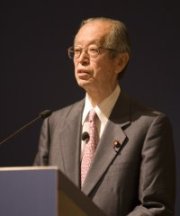 Member of the House of Representatives of Japan

His support of the SMAA serves to illustrate the close ties the group has with Japan, and the degree to which the SMAA is respected in this island nation, the birthplace of budo. Omi Sensei's desire to join the SMAA validates the unique and important work our association is doing to promote and preserve genuinely traditional Japanese martial arts and ways. The presence of people like Omi Koji Sensei, SMAA Senior Advisor, among our leaders gives added weight to the ranks that our members can receive from the various SMAA divisions. They also serve to further emphasize the international nature of the SMAA and our group's close connection to Japan.

The following is a short list of Omi Sensei's many accomplishments:

Selected Publications
1991 Rebuilding Japan: A Country We Can Be Proud Of
1996 Towards a Science and Technology-Oriented Nation