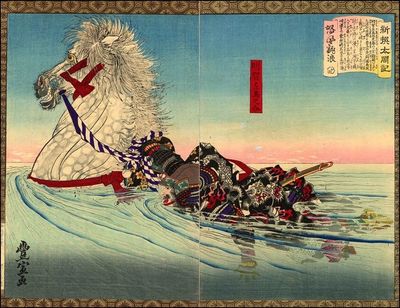 Iwasaki Hisashi Sensei, SMAA Senior Advisor, is the Soke (Hereditary Headmaster) of Kobori Ryu suiei-jutsu. One of the highest ranking martial artists in Japan, he teaches and preserves a very rare and esteemed form of ancient bujutsu.

Suiei-jutsu is the age-old Japanese martial art of combative swimming. Unlike modern budo, such as judo, karate-do, or iaido, the old martial systems (koryu) were often sogo bujutsu. A sogo bujutsu incorporates a number of martial disciplines that are linked by a set of unifying principles as espoused by the art's founder. While not all bushi, or "warriors," studied every one of them, generally speaking there are 18 classical martial arts that often comprise bujutsu. Although the exact arts that made up the bugei juhappan, or "18 martial arts," varied according to martial system, and sometimes according to historical period as well, suiei-jutsu is often described as being one of them.

While not as widely practiced as swordsmanship, samurai swimming was often a part of the bushi's training. It was natural for the Japanese warrior to develop swimming skills in that the sea surrounds Japan, and combat could therefore potentially take place in water. Eventually, swimming and engaging an opponent in water reached a high level in certain clans of warriors. Depending on the speed, size, and depth of the water that was near a particular clan, different skills were developed. For example, some ryu of suiei-jutsu featured methods for swimming under water, while others focused on swimming in fast moving rapids.

Suiei-jutsu served various purposes, ranging from allowing the bushi to silently sneak up on an enemy, to floating for long periods, to fording strong rivers. Bushi needed to be able to swim while wearing armor, carrying flags, weapons, and banners; and they needed to be able to use a bow and arrow while almost submerged. Some ryu also featured grappling while in the water.

At present, suiei-jutsu is seldom taught in Japan. Most of its contemporary practitioners are studying it as a means of recreation, as a way of maintaining their health, and as a method of disciplining their minds and bodies. But make no mistake, the small number of suiei-jutsu teachers that are still extant have not forgotten the martial origins of this rare art form, and they are also preserving it as an important cultural property of Japan.

Iwasaki Soke is one of the people responsible for preserving suiei-jutsu, and he lives in Kyoto.