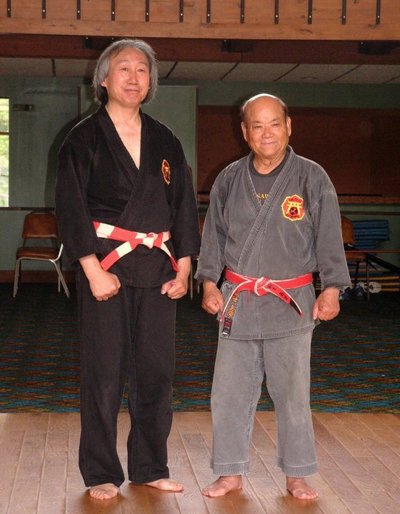 Herbert Z. Wong Sensei's first exposure to the martial arts occurred in the Chinese schools he attended as a young boy in San Francisco's Chinatown. Martial arts were taught as part of the cultural arts curriculum and on an ad hoc basis at Chinese community centers. In 1959, Wong Sensei began his formal martial arts training in karate-do with Walter E. Todd Sensei at the International Judo, Karate and Aikido School. He was one of the first group of students at the school to earn a black belt, which he received in 1961. He continued to train diligently and was awarded his second dan in 1963.

The United States Army drafted Wong Sensei in 1963 and sent him to Okinawa. During that time, he began training with Shimabukuro Eizo Sensei (tenth dan) in Shobayashi Shorin Ryu karate-do. Throughout the time he was in Okinawa, Wong Sensei managed to train almost every single day. Because of this dedication and his previous experience, Wong Sensei earned his black belt in Shorin Ryu near the end of 1964. He was awarded his second dan in August of 1965, which was shortly before he finished his military service and returned to the United States.

In September of 1970, Wong Sensei started in the doctoral program at The University of Michigan in Ann Arbor. While simultaneously pursuing his doctorate degrees in clinical and organizational psychology, he was also teaching classes in Okinawan karate-do and Chinese kung fu. In 1974, Wong Sensei was also made the head of Shorin Ryu for the Midwestern and Southern Divisions of the United States by Shimabukuro Sensei.

After receiving his doctorate degrees, Wong Sensei returned to the San Francisco Bay area in 1975 to run a psychiatric clinic and psychology training center. A few years later he started doing consulting work in addition to running the clinic.

In addition, he continued to travel to Okinawa to train with Shimabukuro Sensei. He received a number of promotions over the years and was awarded his eighth dan in 2005. He was also awarded the title of Shihan by Shimabukuro Sensei, and he received the same ranks from the SMAA.