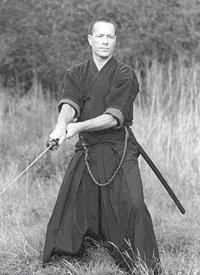 John Evans’ training in martial arts began in his teens when he visited the Anchorhold, an Anglican monastery in the UK, where tai chi chuan and yoga were taught as ways to facilitate contemplative prayer. At Oxford University, he trained in Shotokan karate-do. After graduation, he lived at the Anchorhold for five years, continuing his study of tai chi chuan and yoga.

In 1981, Evans Sensei travelled to Japan, where he was introduced to Mikkyo (esoteric Buddhism) near Mount Takao through Shugendo and kenjutsu (“the art of the sword”). The core of Mikkyo are the teachings of the Buddhist Shingon and Tendai schools brought to Japan by monks who travelled to China to study. In Japan, mountain ascetics (yamabushi) added to these forms of Buddhism native Shinto practices connected with traditionally sacred mountain areas. This knowledge was passed on directly from teacher to student through a systematic and progressive ascetic training in the mountains called Shugendo, “The Path of Training and Testing." This also involved training in martial arts; the ancient yamabushi were renowned for their martial skills.

Largely solitary, in old Japan yamabushi sometimes formed loose associations with certain temples, and they also participated in battles alongside samurai and warrior monks. Yamabushi emphasize asceticism and feats of endurance for spiritual training. White and saffron robed yamabushi carrying conch shell trumpets are a common sight in the sacred mountains of Kumano and Omine.

After three years of intensive practice of Mikkyo, Shugendo, and kenjutsu, Evans Sensei was introduced by the yamabushi to two of the most senior teachers of swordsmanship in Japan, Nakamura Taisaburo Sensei, founder of Nakamura Ryu battodo, and Danzaki Tomoaki Sensei, head of the Kenshukan Dojo of Muso Shinden Ryu. At the Kenshukan, Evans Sensei studied Muso Shinden Ryu iaido and Shindo Muso Ryu jodo (“the way of the four-foot staff”). One year later, he also began weekly trips to Kashima in Ibaragi prefecture, where he trained at the Kashima Shinto Ryu school of classical swordsmanship under Yoshikawa Koichiro Sensei. In 1987, his training regime of swordsmanship and Shugendo was profiled in a 30 minute NTV program in Japan entitled Igirisujin no Musha Shugyo ("An Englishman’s Warrior Discipline").

Following his return to England in 1993, he decided to concentrate on Nakamura Ryu battodo and founded the Fudokan dojo in London. Incorporating training methods from Shugendo and Shadow yoga, he developed a system of tanren (“spiritual forging”) and misogi (“purification”) to cultivate the internal energy required to perform the kata of Nakamura Ryu. Fudokan students also use wooden sword drills and kendo armor to enhance the paired kata of Nakamura Ryu. Since Nakamura Sensei’s death in 2003, Mr. Evans has continued his Nakamura Ryu training in Japan with Suzuki Kunio Sensei, eighth dan/SMAA Senior Advisor, and Sato Shimeo Sensei, ninth dan. Evans Sensei received seventh dan in Nakamura Ryu in 2008.