The Principles of Nakamura Ryu

By Power, Guy
This article first appeared in the Winter 1996 issue of the "SMAA Newsletter." 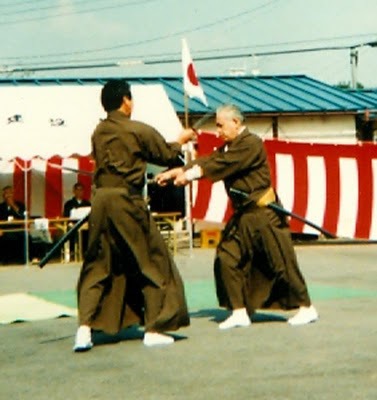 Iai to wa, hito ni kirarezu, hito kirazu. Jiko no renma ni, shugi no michi. "Iai: not killing others; not being killed by others. Self training and polishing, the road to discipline and cultivation."

I had received training in kendo before joining the Japanese army in 1932. In fact, at twenty years old, I was already a third-degree black belt, in both judo and kendo, when I enlisted. During unit training I applied myself rigorously to all aspects of the military arts, and taught kendo to the recruits, officers, and noncommissioned officers of my unit. In 1935, I was assigned to a Boys' Military School as a kendo and jukendo (bayonet fencing) instructor. During this four year assignment, I also studied Omori Ryu iaido. Then, in 1939, I was selected to attend the Rikugun Toyama Gakko (Toyama Military Academy).

I attended the Toyama Army Academy for a six month period and qualified as an instructor of jissen budo, or the battlefield martial arts of sword, knife, and bayonet. These techniques differed from kendo and traditional iaido because they were for combat; they were exact, precise, and powerful. I may offend some, but these techniques were taught to kill effectively with one blow.

I also practice Japanese brush calligraphy (shodo). While teaching kenjutsu in northern China I was inspired with the thought that eiji happo, the eight brush strokes and rules of calligraphy, could be applied to swordsmanship. As I practiced the ei character (this is to calligraphy what do-re-me is to music), I saw in my mind that these eight strokes of the brush traced the trajectories of the sword when cutting. The first brush stroke, soku, is the thrust of the sword tip; the second stroke, roku, is the left and right horizontal cut; the third stroke, do, is the vertical cut; and so on.

When I gazed at the finished ei calligraphy, I could actually see the eight cuts of the sword. Through my years of learning and teaching fencing, I had sensed that there were only a few cuts in swordsmanship. When I contemplated the ei character, I was made to realize that there are just eight distinct cuts possible; any other technique, whatever artistic name it may have, is only a variation of the theme.

This realization was the beginning of my deeper understanding of swordsmanship. Eiji happo (eight brush strokes of the character ei) transformed to happo giri (eight directions of cutting), which is auspicious since the Chinese character ei means "eternal." Also, the number eight is both a lucky and auspicious symbol in Chinese numerology, indicating prosperity and implying "myriad." Therefore, the eight ways of cutting are myriad and eternal.

I began to organize my realizations and ideas into a system of practical swordsmanship devoid of meaningless techniques. Throughout my research I found that most old-school styles (koryu) do not use the kesa giri (downward diagonal cut). I wondered how this could be omitted--the kesa giri is the most natural cut to make, yet it was not being taught in either kendo or iaido. This must be due to the lack of objective, logical thinking: just passing on techniques without thinking into their deeper meaning.

The five kamae (stances) are basic to kendo and iaido. They are the foundation of swordsmanship based on the old-school traditional styles, and are the product of our teachers' teachers' painstaking research. However, I found that the five kamae were out of balance because they left defensive gaps on the left side of the body. To make up for this oversight, I incorporated three other kamae: left waki gamae, left hasso gamae, and right jodan gamae. So, adding to my inspiration of eight methodical cuts, I now incorporated eight defensive fighting postures.

There are various methods of noto, resheathing the drawn sword, which are extant; I have incorporated eight of them into my system. The Toyama Ryu technique of guiding only one third or one half of the blade into the scabbard is standardized throughout. This differs from the old-school technique in which the full length of the blade is dragged across the back of the left hand until its tip slips down into the scabbard mouth. The eight noto which I incorporate are:

The centrifugal force created by this movement is supposed to be enough to shake debris from the blade; however, this chiburi is ineffective. It is impossible to discharge flesh and blood so easily from the sword. The only sure method is to use a cloth or absorbing paper to wipe off the residue.

The chiburi used in Toyama Ryu iaido and Nakamura Ryu battodo is actually an "en garde" position; the sword is snapped down, point slightly elevated at knee level. From this position one can maintain zanshin, as well as convert easily to a thrust should the need arise.

In creating Nakamura Ryu Happogiri, I have researched test cutting through an extensive range of experiences. I have killed three cows at war's end so that hungry soldiers could eat. I have broken several meito (swords by famous smiths) in my dojo while experimenting: on two occasions by striking the blades on their back (mune uchi); and seven times just doing dodanuki (cutting straight down on a horizontal target). I have demonstrated test cutting many times on television, as well as during kendo and other martial arts tournaments. While performing test cutting I always cut bamboo or thick rolls of rice straw as substitute targets. I always display the best sword techniques which I have gained from my experience: the blade angle-of-attack, blade arc-path, firm wringing grip, and spiritual aspects of the unison of sword, heart, and mind. This is true iaido, born from the basic sword of kendo and iaido.

From the seigan no kamae (a variation chudan gamae), holding your sword with its tip pointed at your opponent's eyes, it is said that "the sword is soul and heart." Stand in chudan gamae, middle combative posture, with your heart as the core of yourself, like a big cedar tree. From this seigan no kamae, you can generate ever-changing, kaleidoscopic techniques which are essential to both defense and offense.