The Importance of Understanding & Experiencing One's Center of Balance

By Rippy, Joseph
This article first appeared in the "SMAA Journal" Volume 13, Issue 2 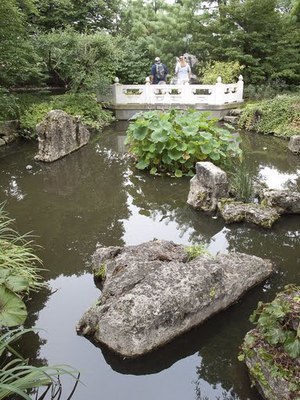 Have you noticed the dignified grace with which all great budo practitioners carry themselves? Not only do they display flawless movement when applying technique but also dignified balance in such a mundane activity as sitting in a chair. Their balance and poise are something one should strive to emulate. What you are witnessing is an individual who has found and developed his center of being both physically and spiritually. He has found his source of balance and power.

Most karate-do practitioners can immediately tell someone where their center of power and balance lies within the human frame. After all, it is clearly stated in most modern works on the subject. Generally speaking, it lies about one and a half inches below the navel, right?

Depending on which book you are referencing, each author might give a slight variation as to its location. Suffice to say it lies in area of the navel, inward a bit from the surface. If we, as discerning students of budo are not careful, we will likely fall into the trap of ideation only and not actually pursue an experiential understanding of the very basis of human movement, this being relevant to any pursuit that deals with refining a physical act demanding control of one’s balance.

Martial artists too often become armchair cowboys satisfying ourselves with an intellectual understanding of a particular subject but completely failing to participate in the practice of that idea. Without a true understanding of our physical center of balance, how can we expect to accomplish such refined techniques as those of our most senior masters?

I was first made aware of the following principles by Joe Sheeron Sensei, senior student of Osaka Toshio Shihan of Salt Lake City, Utah. I am forever grateful.

He noted that as human beings we are bipedal. We normally move using two feet as instruments of locomotion. When we stand on both legs simultaneously or on just on one, we are situating ourselves either on a dual or singular base of support. As an example, when standing still we are generally on both feet, and when walking we alternate between swapping from one foot with the other. Let’s therefore begin with the most basic posture of balance: standing.

Start by assuming shizenhontai, a “fundamental natural stance” sometimes called yoi position in karate-do. Your feet are side by side and shoulder width apart.

Touch the tip of the index finger of either hand to the bellybutton, so that when looking downward you see the finger at a 90 degree angle to the torso. Slowly begin moving the upper body and hips directly to either the right or the left without disturbing the feet. Move so that you are able to see the finger, which indicates the general location of your “central gyro’s” placement in the body, approaching the inner portion of the foot.

At this point, notice that the opposite foot must be slightly loosened from the floor in order for you to continue moving the center point closer to the stationary foot. At some point, when the center area of the body nears the foot, you are almost entirely on that one foot with little weight on the other. Continue to very slowly move the center of the body over the single base of support. As your center of balance approaches the outer or lateral portion of the weight bearing foot, your balance has been severely jeopardized. When the center passes beyond the outside of this single base of support, notice that you will either fall or that you must quickly catch yourself by reestablishing the integrity of your balance with the other foot. This will hold true if you move in the other direction.

What does all this mean? It means that regardless of posture, whether standing still, launching a kick, moving forward, backward, turning, any tai-sabaki (“body movement”), or any other possible way you might choose to move, you must maintain your central point of balance within its base of support. It must remain within the borders of your foot or feet, dependant on the activity that is taking place.

Let’s now carry the importance of balance a step further in our pursuit of perfecting our physical techniques in the martial arts and even the overall activities of daily life itself. After all, budo is not for the dojo alone. (Your practice is not only for yourself but for the positive effect it should have on all who connect with you. Thus, the body and the immediate practice hall become a microcosm of the world. This begins with the practice and pursuit of perfecting your balance. Achieving balance in one’s body in turn helps to achieve balance within the mind and spirit. Anything that is less than balanced is disharmonious and lends itself toward chaos.)

Stand again in shizenhontai. Place both hands on the abdominal region near and around the navel area. Do not press hard; just hold the hands in place. Totally relax the entire body, but don’t collapse. This means bringing the body’s structure into balance so that no excessive tension occurs. Remain in this position as long as it takes to confirm that you are completely relaxed and motionless. This is necessary in order to fully sense even the slightest motion the body may now experience. When you have achieved this condition, take a step forward in the slowest possible fashion.

What was the very first motion you sensed? Some people say they feel their toes flex, others the knees, and so on. If you felt anything other than the belly region shift forward prior to any physical or mechanical movement, go back and try again, repeating the entire sequence. In every form of Japanese budo, correct movement starts with the lower abdomen.

Repeat this drill as often as necessary, until you truly sense that in order to step, walk, and move in any direction, your belly (center of balance) must be propelled in the desired direction. In other words, you must literally throw your center of balance forward in the direction you choose to go. In this case it was simply forward. What happens next is the recognition that the body is basically falling forward off balance and in order not to fall one of the two legs must move out in order to catch oneself.

Did you feel the initial movement of the lower abdomen, which prompts the movement of one of the legs? Congratulations! You have begun to be aware of how you truly move. Off balance, balance, off balance, balance, and so on until you decide to stop walking. This is the yin and yang of human bipedal walking. Heretofore, it was probably difficult to be aware of such simple and subtle movement because you have done this all your life. There has been no reason to stop and analyze the way you moved when walking, but when you aspire to advance in any martial art or sport activity, you must go back to the basics. This is the most basic aspect of bipedal motion.

Consider the implications of applying this knowledge and physical awareness to areas of training such as tai-sabaki, martial body movement. With this understanding of human motion, which always begins with one’s center of balance as the true initiator of any movement, you can now apply this awareness toward the perfection of not only karate-do technique, but also the realization of balanced and integrated motion in all of your activities.

Here’s a quick example. On more than one occasion, Ohtsuka Saiko Shihan (leader of Wado Ryu karate-do) has cautioned students not to move one’s body out of sync; that is, to move only a portion of the body instead of the body as a unified whole. An example of this disconnected movement is when a student steps forward with junzuki incorrectly. (Junzuki in Wado Ryu is generally similar to the oizuki, or “lunging punch,” used in Shotokan karate-do and other styles. In junzuki, if you punch with your right hand, you also step forward with your right foot.)

When junzuki is incorrectly executed, the student’s legs move forward ahead of his abdominal center, instead of letting the limbs follow the center of balance, which is natural for human beings. This type of disjointed movement tremendously diminishes the desired effect of junzuki. It causes excessive movement and wasted effort, two of the three “no-nos” that should never occur in Wado Ryu.

Another example of not moving from the center as a unit is seen when students improperly demonstrate in the third movement of Pinan (Heian) Nidan Kata.  In this movement, you’re moving rearward prior to turning 180 degrees. If you interpret this action as stepping rearward to escape an opponent’s punch, what happens if you move the legs before the torso? In essence, you have allowed the torso to remain almost in the original position prior to any movement. The legs may well be on their way toward escape, but the real target, the torso remains almost fixed allowing the attacker the opportunity to successfully strike. On the other hand, if you had begun the movement with the body’s center, the entire body would have had more than a fair chance of escaping the frontal attack, providing you correctly stepped backwards.

So what does this all mean concerning one’s center of balance? With a simple and direct method of experiencing one’s center of balance, a student can step out of the realm of mere theory and directly validate the idea of being centered. It means that when one consciously trains with this understanding, there can be a return to natural movement. With this new understanding, you begin the climb toward correct application of body movement, irrespective of it being karate-do technique or the polishing of your dining room table. All movement in life should show poise and elegance through applying the correct use of one’s center in the lower abdomen.\