By Armstrong, Hunter
This article first appeared in the Winter 1996 issue of the SMAA Newsletter. 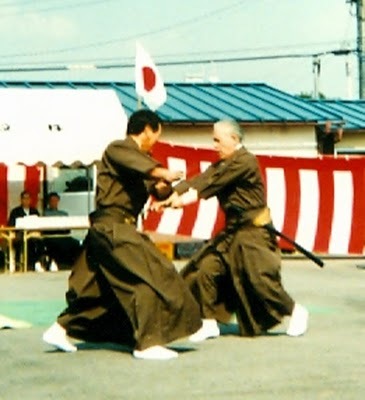 Hunter B. Armstrong Sensei is one of a small number of non-Japanese to have legitimately studied the koryu, or ancient Japanese martial arts, in detail. He lived in Japan for quite a few years practicing directly under the soke, or headmasters, of more than one koryu. (Armstrong Sensei personally believes that koryu bujutsu can be defined as "traditions of fighting arts originating no later than the early Tokugawa era, and whose functional aims were the development of combat effectiveness, discipline, and morality, in that order.") A close associate of the late Donn Draeger Sensei, one of the world's foremost budo/bujutsu authors and historians, Armstrong Sensei succeeded Mr. Draeger as the Director of the International Hoplology Society.

Armstrong clearly has strong views concerning the koryu which, perhaps,not everyone will agree with. He is, however, one of an extremely limited number of people, living outside of Japan, that is actually qualified to write about the koryu.--Editor

Iaido, by definition, is modern solo, sword-drawing practice, usually done independently of other sword arts. A common, but erroneous, assumption is that koryu iaijutsu, or batto, is similarly an independent skill. This is not true. There is a wide gulf between the modern practice of iaido and classical batto. If one goes to Japan to investigate and actually train for a few years, one quickly discovers that in the koryu, sword-drawing is relatively recent. Indeed, in the unreconstructed traditions, what sword-drawing there is, tends to be pretty low down on the priority list.

Classical batto is closely connected to the practice of a tradition's kenjutsu (combative swordsmanship after the sword is drawn). Batto often is simply the solo, live-blade, practice of the kenjutsu techniques (or portions thereof) preceded by drawing the sword from the saya (scabbard). In many techniques, the speed of the draw is not an important factor. For the classical bushi, or warrior, (especially during the more combative periods in Japanese history), the only training of functional value was training that most realistically simulated reality (regularly resulting, by the way, in serious training injuries.) Only in this manner could the bushi be realistically prepared for combat. Solo practice with any weapon was/is an entirely secondary means of practicing. Most bushi felt that solo practice provided no means of training some of the most important skill factors for combat--distancing, timing, and targeting. Batto (and other solo weapons practice) was merely a means of self-practice done when one didn't have a partner. In most classical dojo, very little time was spent on solo practice.

In some present day koryu dojo, the emphases may have changed. Though, in Japan, in most classical traditions, such practice is still a minor part of the overall training regimen. For example, in both the Hikida and Yagyu Shinkage Ryu, there is either no batto, or it is done as a minor part of the overall kenjutsu training. (In the Yagyu Ryu of Yagyu Nobuharu Sensei, there is no Yagyu Ryu sword-drawing, however, his grandfather developed Yagyu Seigo Ryu batto/iai explicitly for modern purposes. In Hikida Shinkage Ryu, the batto is essentially a preparation for two-person, sword-drawing kenjutsu with shinken, or actual swords, which is closer still to combative reality.)

Another common misunderstanding among those who have not trained in a koryu in Japan, is that iaijutsu (combative sword-drawing) came from a situation where one was fighting with another weapon, such as a bow or spear, that when broken in the fracas, forced one to quickly draw his sword, and it became damaged. You must supposedly now immediately draw your sword to continue the battlefield combat. Oddly, I know of only one koryu, that does a limited form of sword- drawing done in battlefield armor, and it is a far cry from modern iaido. The "broken weapon" hypothesis is one of the sillier rationalizations for the development of iai that periodically pops up. If the disseminators of this myth had have ever worn yoroi (armor), they would know that one cannot fast draw in armor. In any case, on the battlefield, the speed of the draw is not nearly as important as awareness, distancing, and timing, none of which are primary aspects of solo, sword-drawing practice.

Another common myth is that in more tranquil times, iai became the bushi equivalent of self-defense instruction, in case of getting attacked on the way to, or from, a saloon. Basically, this is yet another form of silliness. For "samurai self-defense," to defeat "unexpected" enemies, the average bushi relied on skills gained in training with opponents, not on training by himself. Realistically, old world or modern, if an attack occurs so quickly as to require a fast draw from an evidently non-alert defender, the defender loses. What is necessary for realistic combative situations is primarily mental and physical preparedness (called zanshin by some, but not all, traditions). Here again, awareness, distancing, and timing, all part of on-solo training, are vital.

Modern iaido, in practice, has more similarities to kyudo (the way of archery) than to kenjutsu. Modern sword-drawing is analogous to the fast-gun expert who never trains with a target that is shooting back. Both activities may provide great benefits in terms of improved concentration, fitness, and mental development, but they are not the same as training with an actual opponent. No matter how good your draw is against empty air, little in solo practice can prepare you for combat against an armed and active opponent.

Most koryu teachers feel that you can only truly understand life if you accept death as part of it. Yet, they do not commonly dabble in idle talk of morality. They tend to feel that there is no more morality learned in practicing sword- drawing techniques than there is in running hurdles. If any morality (becoming a better person) is to occur, then it must be in a social context. As said before, iaijutsu/batto is part of a larger group-training matrix, i.e., there is give-and-take between opponents. This is the basis for "making a better person" in many koryu.

Koryu deshi, or disciples, do not wield a sword to look beautiful, or merely to be alone with their swords and their own minds. Koryu batto is much more than "being alone with your own mind." While that is valid for a modern non-combative sword drawing art, it has little to do with the classical systems. Batto is a part of the old combative traditions, and while the ultimate barrier likely is your own mind, it is in the context of fear and stress in combat with another. The only way to train your mind to deal with such fear is to train it in that context. In their pure form, the old style "jutsu" are not fun, they are not "spiritual" or "moral" in the way that term is used in the modern budo. They are, however, extremely dangerous, demanding (physically and mentally), and frustrating.

It is probably now clear to readers of the SMAA Newsletter, that I am dismayed by all the martial arts foolishness in general, and the koryu craziness outside of Japan in particular, much of which is now being put out by pseudo-experts. I see these as signs of the eventual distortion and ultimate degradation of the classical Japanese martial arts (koryu). Summer camps with a number of non-Japanese "experts," who have little or no experience in Japan is a perfect example of that distortion. Such a group of so called koryu "instructors" will only present a very distorted view of the true koryu-- "fragile" living arts that are rarely understood even in their country of origin and which are taught on a limited basis, as a means of preserving a Japanese cultural asset.

The great majority of people should not be involved in the koryu, and in fact, would not want to participate in them if they truly understood the nature of such participation. On the other hand, they might be perfectly happy with the practice of modern budo. Koryu bujutsu and modern budo are not better or worse than one another. They are, however, different, and while a certain number of qualified budo teachers exist outside of Japan, the same cannot be said for the koryu.

At this point in time, if you really want to practice authentic Japanese koryu, probably your best bet is to go to Japan and find it. And don't degrade it by trying to bring it to the masses. It cannot be done. It will only corrupt.