By William Kelch
This article first appeared in the "SMAA Journal" Volume 19, Issue 1. 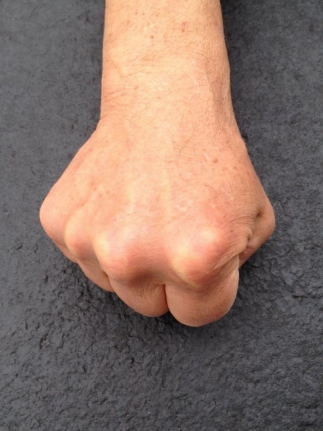 Have you been studying budo for years?

Do you still work on implementing the basics?

Studying the Japanese martial arts is both a physical and mental endeavor. We sometimes get so wrapped up in training in the dojo that we ignore deep basics such as anatomy, physiology, relaxation and physics, each of which is essential to the development of high-level skills. Learning a Japanese martial art requires adherence to correct technique and an understanding that correct technique requires attention to closely related things like posture, kinesiology and balance. Efficient body movement requires a degree of mastery of all of these.

Learning the basic karate-do horizontal front punch illustrates the need for understanding at least a little anatomy. The knuckles of the index and middle fingers of the fisted hand, the part of the hand that transmits energy to the target, must move just a tiny bit to the outside just before impact with the target (see image). This allows the alignment of these two knuckles and the metacarpals behind them with the radius and ulna in the forearm, thus enabling the delivery of the kinetic energy generated by your body mass and the punch’s velocity to the target. If these bones are not properly aligned, the punch will deliver less energy and be less effective. You will also be at increased risk of injuring your hand.

Physiology is also important. Your muscles must have energy to function. If your muscles and liver are, due to fatigue, depleted of glycogen, a precursor of glucose that is the basic fuel of skeletal muscle and most other tissues, you simply cannot deliver an effective blow. You have heard of marathoners and triathletes who “hit the wall.” They “hit the wall” because their muscle and liver stores of glycogen were too low to sustain prolonged exercise. They may quit, or often they struggle to finish, sometimes collapsing either physically, mentally, or both during the struggle. Nausea, cramps, and mental disorientation can result. The same thing can happen to martial artists who do not understand the need to fuel their muscles. While martial artists are not generally thought of as endurance athletes, even moderate glycogen depletion with the resultant reduction in blood glucose levels can reduce mental acuity, reduce reaction time, reduce coordination, and decrease strength.

Martial artists, like those engaged in most other physical activities, must learn to relax. Tension is your enemy. After developing the ability to do some basic techniques in a relaxed fashion, the techniques must be practiced thousands of times to imprint the movements into the body and the brain. But the practitioner must always be relaxed.

You can’t. It’s impossible. Your face and your upper body must both relax simultaneously. Then, and only then, can you punch effectively. If you remain tense, effective punching is nigh impossible. Your “punch,” if you can throw it at all, will inevitably be slow and weak.

Want to put your skills to the test?

Receive rank certification as a full member of the Shudokan Martial Arts Association!  Test under an SMAA teacher or send us a video of your budo performance along with a membership application. SMAA offers separate divisions for karate, aikido, judo, traditional jujutsu, and iaido.

Rank today! Call us today at 734-720-0330 or contact us to learn more about martial arts certification.