A Brief History of Toyama Ryu

By Power, Guy
This article first appeared in the Fall 1998 issue of the "SMAA Newsletter." 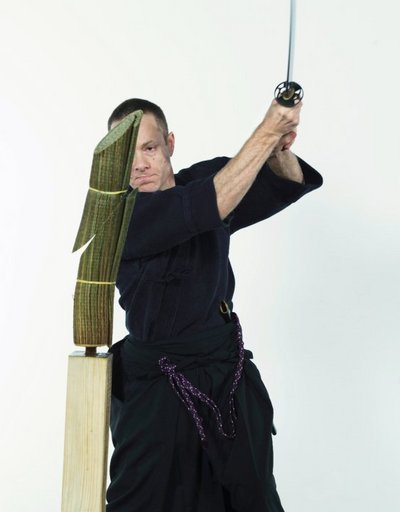 The Heigakko (Officer Academy) was established in 1868 at Kyoto to graduate leaders for the new Meiji Restoration army; it later became the parent school of the Rikugun Toyama Gakko, or "Toyama Military Academy," which was established in 1873. The Toyama Military Academy trained the officers and noncommissioned officers of Japan's modern, western-styled army and was located in the Toyama district of Tokyo. 1 Both academies were the Japanese equivalent of America's West Point, or England's Sandhurst Military Academy.

The mission of the Toyama Academy eventually changed as time progressed. In 1874, the training of officers went to the Rikugun Shikan Gakko, Army Officers Academy; the Toyama Academy became the army's physical training school, as well as the home for the Army School of Music.

In 1925, The Toyama Academy established Toyama Ryu iaido. Five forms employing both left and right kesa giri (downward diagonal cut) were created, adapted from standing techniques of Omori Ryu and Eishin Ryu iaido. 3 Although both Omori and Eishin Ryu do not incorporate the kesa giri, research was conducted on sword battle results of the 1877 Satsuma Rebellion which indicated that 90% of the dead and severely wounded were struck by kesa giri. At about this same period, Nakayama Hakudo Sensei taught at the Academy. I do not know how long his tenure was, but at least one reference 4 lists a notice announcing that Nakayama Hakudo Sensei would be giving a lecture/class on Omori Ryu iaido.

While attending the Infantry Officers Advanced Course at Fort Benning, Georgia in 1985, I was also researching information for the book Naked Blade. I came across a very clear description of the Toyama Academy curriculum in a book written by a British exchange officer. Posted to a Japanese regiment from 1936~, he offers a first-hand account of the academy. 5

Nakamura Taizaburo Sensei, a Toyama Ryu senior master, states that the Toyama Academy implemented a system of army-sword techniques in 1939 because of the Manshu Incident and the Japan-China War. Since earlier references date the birth of Toyama Ryu as 1925, I am presuming that Nakamura Sensei is referring to a probable reevaluation of the then current techniques, and possibly the addition of two more kata and tameshigiri (test-cutting). A circa 1944 copy of Gunto no Soho shows a total of seven kata, and a circa 1944 edition of the "Shin Budo" magazine has a photograph of a helmeted soldier in full field gear cutting through makiwara (straw bundle) with an army sword; the caption states, "At the Toyama Army Academy." 6

In 1874, the mission of schooling officers was transferred to the Rikugun Shikan Gakko at Ichigaya, in Tokyo, where it remained until 1937. In that year, the Ichigaya location was closed down and moved to a broad plain 37 miles southwest of Tokyo, close to the town of Zama. When the Emperor visited during field maneuvers and looked down from the heights to the field below, he is said to have remarked, "This is truly a plain for the training of the military, I will name this 'Sobudai'." Sobudai translates as "Heights for Observing Warriors."

At the end of World War II, the Army Officers Academy at Sobudai was occupied by the U.S. Army and later became Camp Zama. I was stationed at Camp Zama from 1990 through late 1994. (My office was in a converted kendo dojo: what a waste.) During some coordination meetings, I visited the Academy Museum maintained by the Third Engineer Brigade of the Japan Ground Self Defense Force, co-located on Camp Zama. Inside one of the display cases were two certificates presented to officer cadets, awarding them third dan in Ryo-te Gunto Jutsu, or "two-handed army sword techniques."

Although I was not able to get one of the original certificates, the Operations Officer was willing to photocopy them for my research library. I have included this aside to illustrate that fencing was also conducted at other institutions. It would be interesting to discover whether or not the instructors were graduates of the Toyama Academy, and if the manual used was the Gunto no Soho manual. I have talked to former graduates of the Rikugun Shikan Gakko, but they didn't remember--although they did remember fencing and bayonet fighting.

During a one week period, I was privileged to be a guest lecturer at the Japan Ground Self Defense Force (that means "army") Intelligence School. While there, I obtained a chart listing important events at the Toyama Academy, as well as a map of Camp Zama when it was the Rikugun Shikan Gakko. There were a total of six kendo dojo and one bayonet dojo. The buildings each were about 200 feet long and 40 feet wide, with three separate entrances.

Sobudai was divided into two sections, north for the Japanese, and south for the international students (China, Korea, Indochina, etc.). Three kendo dojo and one small dojo--possibly for instructors--were available on the south side; two kendo dojo and one jukenjutsu (bayonet) dojo were on the north side.

After World War II, Nakamura Sensei kept the spirit of the Toyama Academy alive by organizing Toyama Ryu iaido after the proscription on martial arts was lifted by General Headquarters.

In 1977, Nakamura Sensei founded the All Japan Toyama Ryu Iaido Federation. The first president was Harada Jitsu Sensei, a former Toyama Academy fencing instructor and All Japan Kendo Federation kendo and iaido Hanshi. The comprehensive senior master is Nakamura Taizaburo Sensei, battodo Hanshi tenth dan [Editor's note: Renshi, Kyoshi, and Hanshi are traditional ranks/titles that can be said to equate to a Bachelor's degree, a Master's degree, and a Ph.D..]

Nakamura Sensei modified the original seven army forms and added an eighth, itto ryodan. This eighth form is actually a test-cutting technique; its Japanese name means to "cut in two with one stroke." It is extant in other traditional schools, but is taught as a quick draw or surprise attack. It is also known as suemono giri, shin choku giri, nuki uchi, makko, karatake wari, and shomen giri.

Because Toyama Ryu iaido exclusively employs standing sword techniques, as opposed to the kneeling forms of many traditional styles, it is adaptable to one's surrounding environment. The practitioner is not restricted from performing outside the dojo; any place may be used: a gymnasium, racquet ball court, uneven field, or a city park. Likewise, one is not restricted because of uniform requirements.

Although most kenshi (swordsmen) wear the traditional Japanese training wear of hakama (wide skirt-like pants) and keikogi (or uwagi--"jacket"), anything may be worn: sweat suits, jeans, karate gi, slacks, or even the Japanese Self Defense Force white physical training uniform. 7

If the traditional uniform is too costly, or if time is at a premium, one can just strap on the unique Toyama Ryu sword belt, 8 or any other wide-support belt, and begin training. Since Toyama Ryu exclusively uses standing forms, you needn't be concerned about dirtying your business clothes on the floor or ground, an impossibility with many of the traditional styles.